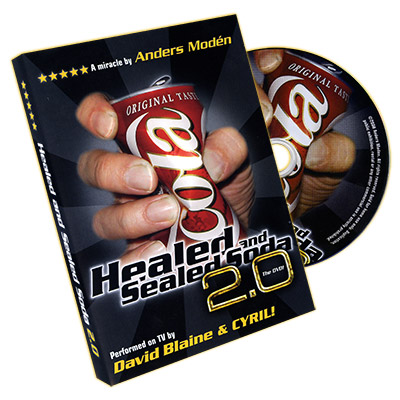 An empty and crushed can of soda magically restores and refills before the eyes of the spectators.

An empty and crushed can of soda magically restores and refills before the eyes of the spectators.


Impossible to improve? Here’s the 2.0 version of Anders Modens ingenious Healed and Sealed Soda, the effect originally performed by David Blaine on “Vertigo”.


Anders Moden shares his thoughts on the methods, the handlings and the presentations of his masterpiece. He will also guide you through various additional techniques that he has kept to himself. Until now.

Pour the last drops out of an empty a soda can.

Crush it ?quot; in front of the spectators – and show it around.

Command the can to heal itself ?quot; the spectator will see and hear this happen.

Wave your hand over the opening and the hole will seal itself!

Now the can to magically fills up.

Open the can with a pfzzt!

Pour the soda in a glass.

Hand everything out to the audience.


Anders Mod?n will take you through every step of the trick in detail. He will also show you:

an ingenious transposition effect where the drink visibly and instantly moves from a full coke can to an empty orange can!

Variations in set-up and handling

‘”I think Healed and Sealed Soda is one of the BEST and MOST magical effects that people say is REAL MAGIC when performed.”

“On my cruise ship I levitate my Daughter, cut my wife in two and make it snow, but when I perform Healed and Sealed Soda it brings the house down!”

Be the first to review “Healed And Sealed 2.0 by Anders Moden – DVD” Cancel reply