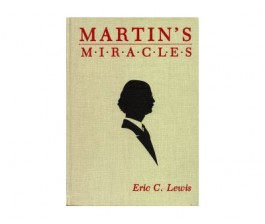 Martin’s Miracles has been one of our most consistent sellers for fifteen years and the reason for that is simple: Cardiographic.

Martin’s Miracles has been one of our most consistent sellers for fifteen years and the reason for that is simple: Cardiographic.


On Page 67, Martin Lewis describes an effect wherein a deck of cards is drawn on a large sketch pad and a drawing of a selected card rises up out of this cartoon. The page upon which this miracle has occurred is torn out and handed to the spectator. This trick has appeared on every show from your local magic club’s to David Copperfield’s TV special.


Martin Lewis started out as the resident magician at San Francisco’s famous Magic Cellar and then graduated to revue shows in Las Vegas and Reno and finally cruise ships. The many close-up, platform and stage effects that were honed to perfection in these demanding venues have been collected together in Martin’s Miracles.


Succeeding in all of these areas requires an extraordinary amount of commercial material. His jumbo monte routine (Sidewalk Shuffle, Page 95) is another modern classic.


Today, hundreds of full-time pros around the world are performing this knock-your-socks-off material.


“I loved everything about the book and you will too if you like commercial, offbeat ‘A’ material.”–Rick Johnsson – Linking Ring magazine

Be the first to review “Martin’s Miracles” Cancel reply