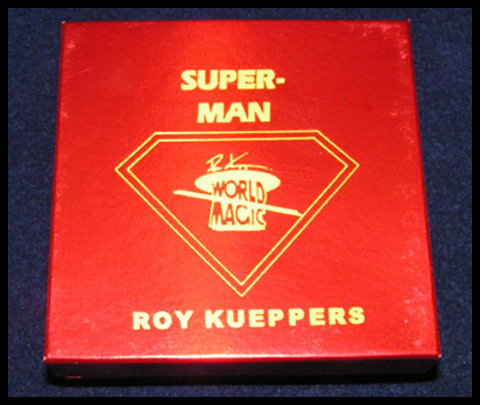 The Magician approaches an unknowing spectator and asks, “Do you have a quarter on you today, Ma’am?” The spectator proceeds to look for change in her pocket. The Magician then prompts, “Could you please sign the coin for me before I take it from you.” (The coin does not need to be signed, but it adds to the effect’s finale.) At this point, the Magician takes the coin, holding it in view of the spectator, and says, “I’m going to try something here … You know what? You may be able to do the same as I do. Do you have another quarter?” The spectator reaches into her pocket and retrieves another coin. The Magician, holds the signed, borrowed coin at the fingertips, and begins to rub the coin, saying, “Rub your coin like me. Can you see mine starting to bend?” The Magician finishes showing the bent coin, and immediately gives the coin to the spectator as a souvenir.


? The coin can be fully examined.

The new Super-Man version 2.0 features include:

– The gimmicks are now slotted at both ends which serves two purposes.

1) If one end should wear out in time from crazy amounts ( thousands ) of bends, or misuse, the opposite end can be used giving you twice the life.

2) One of the slots is slightly wider than the other, giving many more options for coins that can be bent. The wider slot will now allow for bending thicker coins including various coins in all currencies world wide.


– There are two holes ( one at each end ) for hooking up the Elastic cord to use Gimmicks as pulls if desired.


– Each set now comes with 2 Rubber End caps that are fitted over one of the ends/slots ( end not being used for bending ). Caps can be easily installed and removed over and over as necessary. These caps serve two purposes.

1) The rubber cap will act as a cushion and protect your hand while bending a coin.

2) When not using pulls, the slotted end can be easily identified when retrieving the gimmicks from the pocket for a performance.