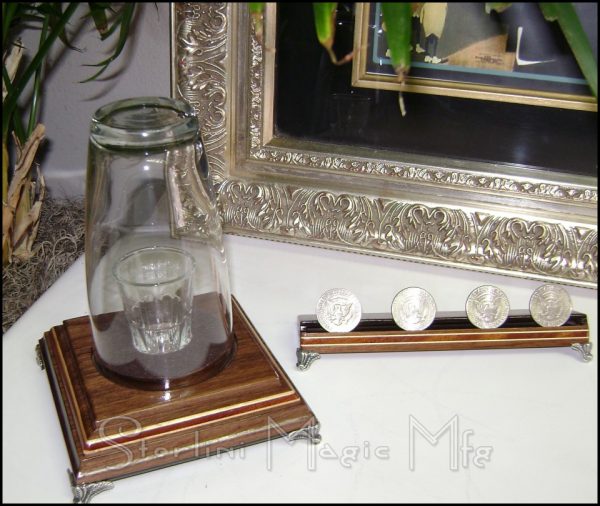 Four half dollar coins are shown and placed on display in full view on a walnut and pewter stand. A shot glass is placed, mouth up, on a beautiful Walnut base. The shot glass is covered with a larger glass sealing the shot glass inside.

As the magician holds the base with the glasses in one hand, one coin is removed from the stand and tossed into the air where it vanishes as it is instantly heard to land in the small shot glass with a large clink. It can be shown all around as the coin is actually in the shot glass. The large glass can be removed from the base and the half dollar poured out or left in place.

One by one each of the four half dollars is vanished and appears in the shot glass with a loud clink. The spectator can actually see the coins visibly land in the shot glass through the large glass. Unlike other versions of Coins to Glass, I have performed this illusion close up many times as close as 2 feet and every time the spectator was completely fooled.

Made of Walnut with custom made maple and mahogany wrap around Inlays and solid Pewter feet!

Comes complete with: Glasses, Base, Coin Vanishing Stand, Instructions, and all the Kennedy half dollars to get you up and amazing!