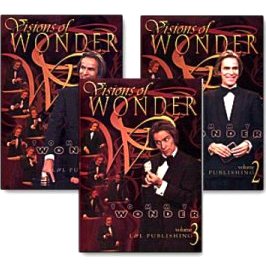 Tommy Wonder is a living legend in magic. The routines, philosophy, creative process, and thinking detailed on Visions of Wonder are why he is hailed by his peers as one of the top performers and thinkers in magic and why many consider him one of the most important magicians of our time.


These videos will demonstrate a master at work, a performer who so thoroughly understands magic and his audiences that he has people question whether they’ve seen the real thing. You will learn how to apply these lessons to your magic and thus make you a better magician. You will see how an audience can be devastated and deeply touched by a magic performance and you’ll be inspired to bring your magic to a whole new level.


In addition, on all three volumes, Max Maven will guide you through some fascinating discussions with Tommy Wonder where you will get an insight into the psychology, thinking, and creative process that have made Tommy Wonder a living legend in magic.


These videos are unlike any other project L&L has created. Not only is Tommy Wonder’s magic unbelieveably brilliant, but the editing and candid behind-the-scenes footage take these videos to an entirely new level. That’s a promise!


What?s more, there?s a special treat on the DVD ? an easter egg with fifteen minutes of extra bonus footage on each volume.


To get to the special Easter Egg on each of the Tommy Wonder Visions of Wonder DVDs, follow this procedure:

From the Main Menu, click on ?Other DVDs from L&L Publishing.? Then, click on the right arrow until you get to the screen that displays Max Maven?s videoMind series. Click your remote?s Up Arrow button, which will light up Max Maven?s name. Press Enter and ? Eureka! ? fifteen minutes of extra bonus footage!

The Ring, the Watch, and the Wallet – Tommy relates how he was recently robbed. He takes off his ring, takes the money from his wallet, and takes the watch off his wrist. He then very cleanly puts the items in an envelope and openly tears the envelope to shreds. Tommy instantly holds up his hand and there is the ring back on his finger and the watch on his wrist. He opens up his wallet and there is the money back inside. Truly stunning.


Magic Ranch – Tommy Wonder’s take on a Don Alan classic. A plastic egg suddenly appears on the table in front of the spectator and well away from Tommy. A card is selected and lost in the deck of cards. The plastic egg is opened to reveal a miniature duplicate of the selected card. The audience is further stunned when the deck is shown to contain all duplicates of a different card from that which was selected.


Through the Eye of The Needle – A needle and length of thread are shown. The thread is rolled into a big clump and placed on top of the needle. The thread is then miraculously pulled through the eye of the needle again and again until the entire clump is neatly threaded and snipped off at the top. You’re left with a needle tightly threaded with 20 separate strands and an audience in disbelief!


The Tamed Card – Tommy Wonder’s unbelievable take on the Peter Kane/Frank Garcia Wild Card plot. Tommy has added a fantastic presentation, turning this into an entertaining piece of theater. It requires no table, it resets easily, has magnificent card changes, is extremely practical, and is designed to fool even those who see it over and over again.


Two Cup Routine – Tommy Wonder’s claim to fame, the Cups and Balls routine, has fooled some of the best minds in magic. It’s practical, does not require loading from the pocket, and will amaze your audiences over and over.

ELIZABETH IV – The performer removes a clear envelope with a wager and a prediction. Any card is named and contents of the clear envelope are openly removed. The prediction matches the freely named card.


RUBIK’S CARD -Tommy shows a small box filled with blocks that have card pips on some of their sides. A card is selected and the lid is removed from the box to show that the blocks have somehow arranged themselves to form an image of the selected card.


SOCKED COINS – This routine has never been explained and has been a closely guarded secret that Tommy Wonder has kept for himself. It’s one of the finest coin routines ever created. In a lesson on how to lose money, coins penetrate a spectator’s hand in an increasingly impossible manner. It resets, can be done without a table, and is incredibly strong.


Tommy goes on to explain his workings on Cough DROP, vanishing bird cage, the boomerang card, the Zombie Ball, and his wonderful ring and rope routine.

NEST OF BOXES – Tommy discusses in tremendous detail three unbelievable versions of the Borrowed Watch to Nest of Boxes. You will shake your head in disbelief and be absolutely dumbfounded.


COINS ACROSS – A combination of the Coins Across plot, a coin box routine, and a wonderful Coin in Eye routine to close. This gets the same strong reaction of the Card On Forehead but with coins. Practical and incredibly strong.


AMBITIOUS CARD PLUS RING BOX – See why a card trick gets standing ovations time after time. Tommy slowly builds and builds the impossibility of the classic Ambitious Card effect and ends with one of the best versions of the signed card to box plot in existence.


Tommy also demonstrates his fabulous handlings for two classic effects-Card Through Handkerchief and Everywhere and Nowhere.