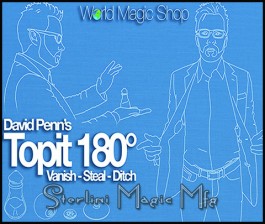 
“If real magic existed I am sure this is what it would look like! David Penn has taken this utility device to the next level. If you want to improve your magic get this gimmick! You won’t TOP IT!”
Doc Eason

David Penn has lectured all over the world on his natural technique with a Topit. Recognized as a modern master, of this sometimes forgotten utility device, David now presents his evolution of this incredible gimmick – TOPIT 180

With TOPIT 180 you can vanish a small object at any time! This can be presented as an effect or to covertly ‘finish clean’ after an effect that requires a gimmick.

As described, and shown on the trailer, the very same object can then be retrieved under very little misdirection after it is transited to a holding area, which is all built into TOPIT 180. This very same area can be used to ditch objects covertly giving you so much freedom in your routining.

If you are familiar with a topit you will revel in these new possibilities however if you are new to topitting David covers obsoletely everything in the comprehensive download that you are given access to.

As well as the techniques involving vanishing, stealing and ditching small objects, you will be taught effects with: Metal Bending, Candles, 8 Ball Transformations, Glass Restorations, Coin In Bottle and Salt Pot Vanishes.

TOPIT 180 is the ultimate TOPIT!