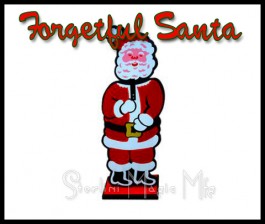 An absent minded Santa is shown to the spectators as the magician talks about a Santa who is very forgetful. He forgets where he put his Christmas list and how many toys he promised each good little child. He is so forgetful that he once forgot where he left his head. As the magician says this, he takes the head from the body and vanishes it in a devil’s napkin decorated like Christmas wrapping paper (provided with the effect). The magician then takes a balloon, blows it up, and places it where the head was on the body.


For an additional comic effect, a mouth, eyes, beard, hat, and nose are drawn on the balloon with a magic marker. The magician has a conversation with Forgetful Santa where he tells him how unhappy he is to have “lost his head.” The magician gets a promise from Santa that he will bring all the good little girls and boys something extra and try not forget things anymore and he restores his head with a few magic words. The balloon “magically” pops and Santa’s head is restored. This is a brilliant trick for children and grown-ups of all ages. Vibrantly painted and made of durable, thick hardwoods, the Forgetful Santa stands a full 2 feet in height and comes complete with an extra head, Devil’s Handkerchief, wooden base, sure-fire balloon-popping mechanism, and detailed instructions.!

Be the first to review “Forgetful Santa” Cancel reply