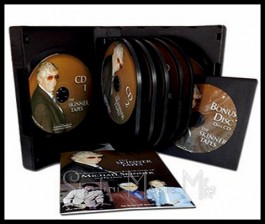 Michael Skinner was the very definition of a great close-up magician?one of the best of the 20th century. He had an interesting and elegant way of handling objects, and his verbal presentation was punctuated by engaging, dramatic pauses that would terrify mortal magicians. He was renowned for his unique style, which combined excellent presentation and superb sleight-of-hand ability. He performed great effects created by others, and he also routined those items by adding own personal touches. All of this elevated his magic to a high level. And he was ingenious and creative, changing existing tricks to make them much better. Above all, he was a professional magician who spent his entire life performing for the lay public. This provided him with the magician?s equivalentof ?perfect pitch??he unerringly knew the routines that garnered an ecstatic reaction from those that bored laymen but were interesting to magicians.


With this special set of 10 CDs, two DVDs, and a bonus Data CD, you?ll feel as if he?s sitting across from you and revealing his most valuable secrets. On the CDs you will hear audio correspondence sent by Michael to his friend, magician Allen Okawa in Hawaii. Edited from over 30 hours of tape, you?ll learn Michael Skinner?s best tricks, patter, presentation, and advice for performers, all in his own words. He?s occasionally joined by Larry Jennings, John Carney, and Roger Klause. It?s 10 master classes from a master magician, and an intimate way to become friends and learn from the best of the best.


On the first DVD is Michael?s famous lecture in Japan circa 1971 at its almost-full length of 120 minutes. It?s of mediocre video quality, but is a priceless record of Michael?s repertoire at that time. On the second DVD are excerpts from a private session with Michael performing at his peak. The Bonus Disc contains Skinner?s notebooks and assorted lecture notes.